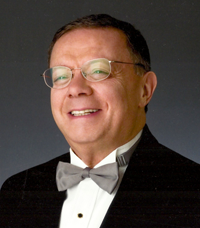 Dr. Hugo Goldenzweig has performed as a recitalist, soloist with orchestra, and chamber musician in over 1,000 concerts worldwide, including five major New York recitals. He has also given master classes for leading conservatories and universities in the U.S. and abroad. Peter Davis of The New York Times hailed his debut at Weill Recital in Carnegie Hall: “…A satisfying performance…a sharply profiled and warmly committed interpretation. Mr. Goldenzweig elucidated textures crisply and cleanly.”

His recital programs often combine the classic repertoire with works by composers from his native Argentina and contemporary composers, and he has premiered several major works. His Lecture and Recital “Argentine Piano Music of the Last Fifty Years” was videotaped under a grant by the New School University. In 1993 he gave the world premiere of the Concerto No. 2 for Piano and Orchestra by Alcides Lanza in Buenos Aires, with the National Symphony Orchestra of Argentina under Peter Bellino. One of the highlights of his 1993 European tour was his recital at the Reina Sofia Center for Contemporary Music in Madrid, where he gave first performances of new works by Spanish composers Luis de Pablo and Cesar Camarero and the Argentine Alcides Lanza. Leopoldo Hontanon (Scherzo Magazine, Madrid) wrote: “…marvelous pianistic performances by Hugo Goldenzweig, who was not only infallible to the letter but also an artist who knew how to penetrate into the spirit of the new compositions….”

In 1999 he recorded two CD’s for Spanish Radio and Television. In 2001 he premiered the Concerto for Piano, Percussion, and Strings of Dante Grela (dedicated to the interpreter) with the Orchestra Celebrate! program under Laurine Celeste Fox in New York City.

Dr. Goldenzweig is the Chairman of the Piano Department in the Extension Division at Mannes College of Music in New York City, where he gives courses on Piano Pedagogy, the Chopin Etudes, Piano Music of Argentina, and Principles of Piano Technique.

Before coming to the United States, Dr. Goldenzweig won several competitions and performed extensively in Argentina. After studying with Nadia Reisenberg at Mannes, where he held a full scholarship and received the Post-Graduate Diploma with Honors, he obtained his Master’s Degree from the Manhattan School of Music as a pupil of Dora Zaslavsky. In 1987 he received his Ph. D. in piano performance from New York University, where he studied with Seymour Lipkin. He coached privately with Arminda Canteros from 1978 until her retirement in 1994. Mme. Canteros endorsed Dr. Goldenzweig’s teaching saying, “Of all my master students his teaching most closely resembles my own.” His doctoral dissertation, a performance guide for the Chopin Etudes, included an innovative videotape of him performing all twenty-seven etudes in recital. The simultaneous use of two cameras circling the piano provided visual excitement as well as a close-up view from innumerable angles. The student can also use the still frame feature to observe any particular detail of the performance.

Dr. Goldenzweig’s artistry has been acclaimed in successful tours in the U.S., Japan, Spain, Argentina, and Mexico. In 2005 he recorded a CD of a live concert in New York City with his sister, the violinist Ana Maria Goldenzweig, and a double-CD set of a solo New York recital.

A comprehensive guide with theory and analyses geared toward the performer, along with practical tips and solutions to the thorny problems posed by the etudes. For more information and to purchase, contact Dr. Goldenzweig.